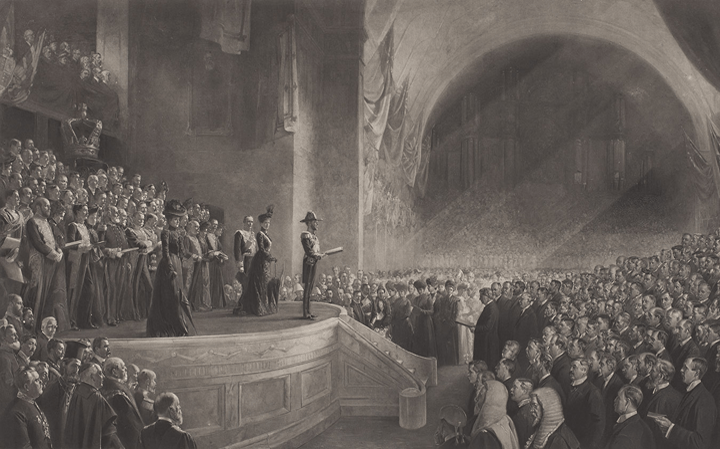 If we were to travel back in time 113 years from 1901, we would find ourselves in 1788, the year the first fleet arrived in Botany Bay. Most of the fleet’s passengers were convicts. Some were hardened criminals, rapists, murderers, but the majority were first offenders guilty of lesser crimes, such as theft, in many cases petty theft. One poor bloke was sent out here for stealing a postage stamp. That’s one postage stamp.

According to the passenger manifest, there were 13 Jews onboard the antipodean vessels. Unofficially, there may have been more. But we’ll go with 13. It’s a fittingly symbolic number for the Jewish contribution to this country.

Being Jews, many of them gravitated to positions of power and influence. There were Jewish bankers, Jewish politicians, Jewish captains of industry, Jewish members of the cloth even. Not all Jews were upfront about their racial origins. More than a few hid behind Anglo-friendly names and presented as white.

Notwithstanding the political wallop the Jews packed, they could do nothing to stop the passage of the White Australia Policy, though they would have dearly loved to. A white country that actively seeks to remain white is anathema to Jews. They know innately that their doom is to come in the form of a racially, spiritually united white race. It’s as if Satan had engraved Obadiah 18, a Bible prophecy that foretells the God-ordained genocide of Esau’s seed (the modern-day Jews), in their DNA. This is why Jews have always striven to eliminate our people. No white race means no fulfillment of Obadiah 18.

Leaping forward in time to the big now, imagine what would happen if controversial Queensland senator Fraser Anning stood up in federal parliament and called for the reinstatement of the White Australia Policy. He would be lucky to make it out of the joint with his vital organs intact. The Jews, hybrids, sexual perverts, and white race traitors, but mostly the white race traitors, who make up our federal parliament would rip out chunks of his flesh with their gnashing teeth. Fraser would not be getting his White Australia Policy.

Buggery, blasphemy, child murder (abortion), and public intoxication were criminal offenses. White Australians recognized God in their homes and their public and private institutions. They prayed to Him over the evening meal, at school assemblies, on the floor of parliament, and corporately during times of national crisis.

Not all of them were practicing or even nominal Christians. There were sprinklings of atheists and agnostics among the population. But the majority were cognizant of God and guided by the moral principles He had written in their hearts. Consequently, He blessed them according to His promises.  Thus they prospered and they multiplied, and Australia was protected from non-white invasion, legal and illegal.

Our countrymen’s descent into sin and apostasy in the years following the Second World War saw God replace His promised blessings with curses. Curses that ensure our economic decline, non-replenishing birth rates, and demographic displacement by aliens of the terrestrial variety. This last curse is found in Deuteronomy 28:43: The stranger that is within thee shall get up above thee very high; and thou shalt come down very low. Proof of its fulfillment in Australia is, to say the least, ubiquitous.

The power that Jews wield here is in direct proportion to our sin. The more we sin, the more power they wield. This rule applies to white countries all over the world. It has throughout history. The high degree of Jewish meddling in Australia is symptomatic of our predicament, not the cause of it. Our departure from God’s Law is the cause.

Until we treat the disease rather than the symptoms, no amount of pro-white activism on our part is going to improve things for us. But how do we treat it?

2 Chronicles 7:14
If my people, which are called by my name, shall humble themselves, and pray, and seek my face, and turn from their wicked ways; then will I hear from heaven, and will forgive their sin, and will heal their land.

We turn back to God and live our lives in the biblically prescribed manner. Or we perish. Perish as individuals, perish as a race. The choice is ours.

I recommend the first option.