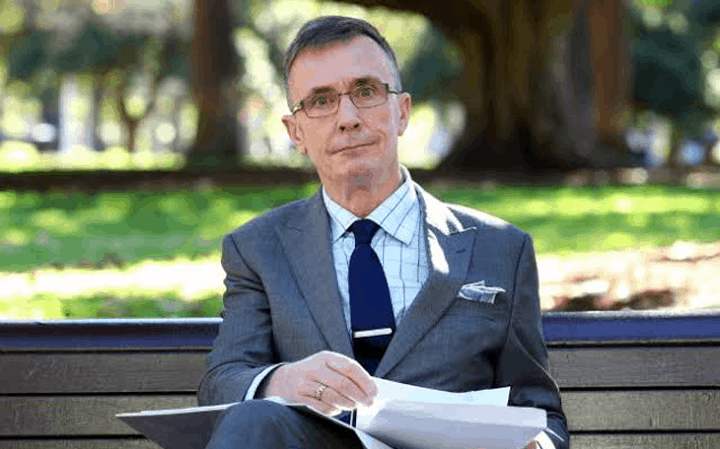 Romans 1:24-32 (Amplified Bible)
24 Therefore God gave them over in the lusts of their own hearts to [sexual] impurity, so that their bodies would be dishonored among them [abandoning them to the degrading power of sin],
25 because [by choice] they exchanged the truth of God for a lie, and worshiped and served the creature rather than the Creator, who is blessed forever! Amen.
26 For this reason God gave them over to degrading and vile passions; for their women exchanged the natural function for that which is unnatural [a function contrary to nature],
27 and in the same way also the men turned away from the natural function of the woman and were consumed with their desire toward one another, men with men committing shameful acts and in return receiving in their own bodies the inevitable and appropriate penalty for their wrongdoing.

Garry Burns is an Australian sodomite activist and vexatious litigant who uses Australia’s legal system to punish people who rightly believe that homosexuals are sexual degenerates.

The psychiatric profession once classified homosexuality as a mental illness. Did shrinks have it right back then or were they all just raving “homophobes” in need of a thorough head-read themselves? And what about all the politicians who passed laws making sodomy a criminal offense, were they off their rockers too?

Burns, a mega dork who wears a constant expression of pleasant shock, as if he’d mistaken an obelisk for a desk chair, has for years been suing Australians for verbally bashing poofters, rugby player Israel Folau and conservative Catholic Bernard Gaynor , to name just two.

Mark Latham castigated Burns in parliament last August for his barratry. But the One Nation politician saved his biggest serve for the NSW Anti-Discrimination Board, which facilitates Burns’ legal hissy fits. Burns is simply a tool that the members of the board, Marxists all, exploit to further their anti-Christian/anti-white agenda.

Christianity is a whites-only religion which proscribes the death penalty for homosexuals. That it is synonymous with the white race is

proscribes the death penalty for homosexuals.

condemns homosexuality, is a white man’s religion. It originated and is synonymous with whites. That’s why white civilization is known as Christendom. An attack on Christianity is an attack on whites and, more specifically, white families, which has always been the raison d’etre of the gay rights movement. A movement created and underwritten by Jews. Putting homosexuals on an equal footing with heterosexuals legitimizes sodomy and so-called gay marriage in the eyes of the public. A greater social acceptance of a particular practice or lifestyle inevitably results in more people adopting it. More homosexuals means fewer heterosexuals. Fewer heterosexuals means fewer (white) children. Fewer white children means fewer whites.

At any rate, Burns should enjoy himself while he can. Even though the delusional little queer thinks he’s ushering in a glorious age of (legally enforced) approval of his fellow sexual perverts that will last forever, it won’t. God is ultimately going to bitch slap him and his enablers out of existence. The sooner, the better.