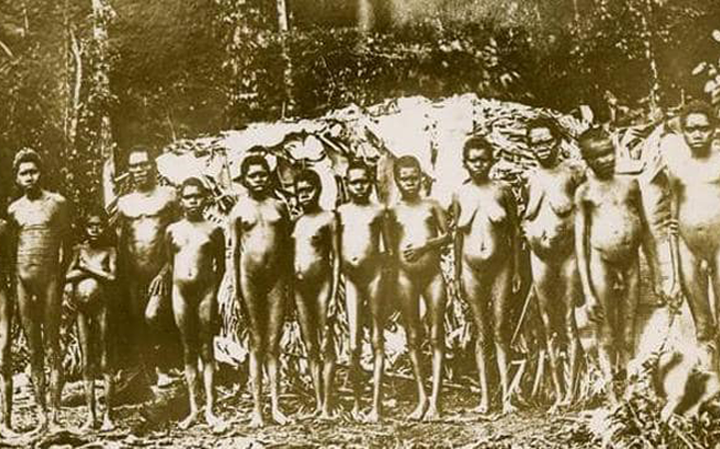 A day does not pass here in the Land of Oz without whites being reminded by the unhallowed media that the dusky, angelic beings ungrammatically referred to as Aboriginals deserve unlimited amounts of cash and deference from us because of the Hitlerian behavior of our ancestors toward theirs. Aboriginal isn’t a noun, it’s an adjective, e.g. Aboriginal art, Aboriginal history, Aboriginal quantum mechanics, but it’s used as such by everyone who doesn’t wish to come across as racist. In the beclouded minds of the politically correct, Aboriginal is a much more congenial term than the ridgy-didge noun Aborigine. Aborigine connotes primitiveness. Primitive customs, primitive dwellings, primitive physiognomy even. Aboriginal, however, has a softer, not-so-anthropological edge to it.

As Australia continues to shed its white European skin, the kowtowing to Abos (I use the term purely in a scientific sense) has become more frequent and pronounced. “The Traditional Owners of the Land” are now recognized at every major public ceremony and are the dominant point of discussion in every school class on Australian history. What have stupid-looking whites done for this desiccated slab of real estate, anyway? Places that once had European names, now have Abo names. Ayers Rock became Uluru. Diamond Valley became Nillumbik. And Birrarung Marr remained Birrarung Marr because you couldn’t possibly come up with a more Abo-sounding name than that horrid conglomeration of syllables. Our national broadcaster, which swings so far to the left it ran Justin Trudeau off the road, places a warning for Abos at the start of every program it televises that contains images or references to their freshly dead. Blackfellas in mourning consider these things extremely offensive, you see. No expense or effort is spared, though, to not whack disclaimers on material offensive to the white Australian population. That is, all ten of us loopy enough to regard TV shows that popularize race-mixing, sexual degeneracy, and the demographic whittling away of whites through non-white immigration as offensive.

But what if they weren’t the first Australians? And what if they too turned out to be somewhat slap happy to persons not of their race?

In the first volume of his monumental work, History of Australia, the late, lauded historian, Manning Clark, discusses a race of pygmies called alternately negritos and Barrineans who lived in the tropical rainforests of North Queensland. Aborigines of the region knew them by a number of different tribal names, such as Djabuganjdji, Mbarbaram, and Yidinjdji. They were believed to have arrived in Australia more than 40,000 years ago. This places them on the continent at least 20,000 years before the Aborigines.

Prior to the Jewish-led push for Aboriginal rights in the early 1960s, the existence of this diminutive people was common knowledge among white Queenslanders. There were whites who’d met and even worked with them. But about 60 years ago, they were redacted from the pages of Australian history.

In their Quadrant article, The Extinction of the Australian Pygmies, Keith Windschuttle and Tim Gillin explain why the subject of Australian pygmies became largely verboten in academic and political circles.

No one today with a lay interest in Aboriginal anthropology, and few of those doing introductory courses in the subject, would ever find out that Australia had a pygmy people. What, then, has been going on? Why would these people have been expunged from popular memory? How did the Australian pygmies become extinct within the public consciousness?

There have been two main reasons. We explain them in detail below but, briefly, they were: first, a vitriolic debate within the academic discipline of anthropology in which the view prevailed that there was nothing remarkable about these people; second, the emergence in the 1960s of the radical Aboriginal political movement, which found the existence of a pygmy people an inconvenient counter-example to one of its central doctrines. As a result, these indigenous Australians have been subject to an airbrushing from history that makes even that of the old Bolshevik leadership of the USSR in the 1930s look mild by comparison.

An “inconvenient counter example” indeed, but, as we shall see, not just because the pygmies predated the so-called first Australians.

At the time, Tindale and the American academic, Joseph Birdsell, were engaged in the most extensive project ever mounted in Australian physical anthropology to measure a large sample of Aborigines according to their weight, stature and a number of other bodily characteristics. They found the prospect of discovering a group in the Queensland rainforests so at variance with the norm, irresistible.

They also knew that, since the nineteenth century, there had been a number of theories about the origins of the Aborigines and the migration of ancient peoples to the Australian continent. In 1927, in his book, Environment and Race, the controversial Sydney geographer, Griffith Taylor, had speculated that several waves of Aboriginal migrants had swept before them an even older “Negrito” race. Maybe these rainforest people held the key to the story.

“Swept before them an even older ‘Negrito’ race . . .” Or, to put it another way, the Aborigines killed the pygmies because they occupied land the Aborigines coveted.

If this troublesome truth became public knowledge, it would bring the immense Aboriginal rights machine to a screeching, permanent halt. The Aborigines could no longer lay claim to being Australia’s first inhabitants nor elicit billions of taxpayer dollars because of past mistreatment from whites, not after driving the country’s genuine first inhabitants to virtual extinction.

Now, in case anyone thinks I may have misinterpreted the authors’ words to fit my ultra-racist view of the world, here’s what they have to write later in their article:

The Sixties movement adopted the anti-imperialist rhetoric then prevalent in southeast Asia and Africa. British colonialism had caused indigenous oppression and dispossession, they argued, so all Aborigines should come together to reject the hegemony of white Australia. Although this was primarily a movement of radical urban blacks trying to create a constituency among dispersed Aborigines in rural areas, the appeal galvanized considerable support, especially among white sympathizers.

Their appeal to pan-Aboriginalism, the notion that all Australian indigenous people had a common political interest, was always dependent on the idea that they were one people. (The only exception allowed was that of the Torres Strait Islanders, who were later defined as a separate entity.) Their politics were based on the claim that they were the original owners of the continent who had been dispossessed by the British. They did not want to allow there might be a hierarchy of claims for arrival, and thus ownership, among Aborigines themselves. So anyone who argued against the “one people” thesis would be seen as betraying the pan-Aboriginal movement and undermining Aboriginal political aspirations.

Moreover, the moral appeal of the activists’ case would have been weakened by the notion that there had been several waves of Aboriginal migrants, each of whom had violently dispossessed the other. Rather than a story of aggressive white imperialists disrupting an arcadian Aboriginal people living in harmony with one another and their environment, the long term history of Australian habitation would have resembled more that of humanity at large where the stronger have pushed aside the weaker, irrespective of the colour of either side. Hence, instead of a simple moral tale of goodies and baddies, the history of this continent would have reflected more the hard reality of the human condition everywhere.

I won’t condemn abos for killing the pygmies. They simply did what numerous races of people have been doing since the beginning of recorded history: acquire land and resources by right of conquest. A right customarily exercised with great bloodshed. But this, of course, does not fit the good-Abos-bad-whites fable Jews have concocted to convince us white Aussies that the smallest expression of racial pride on our part will ultimately lead to the genocide of millions of peaceable non-whites here and abroad. If we’re scared or ashamed to delight in our DNA, then we’ll do bugger all to stop foreign invaders from consigning us to the same fate as the long-forgotten Australian pygmies.

The Bible states that the earth is the Lord’s and the fullness thereof (Psalm 24:1). God is the traditional owner of this land, of all lands. He didn’t set aside Australia for pygmies, Aborigines, Chinese, Lebanese, or anyone else but His Elect, the pure white race. The day we collectively repent of transgressing His Law is the day He will give Australia back to us.